Showing posts with the label Gloria Bamiloye.
Show all 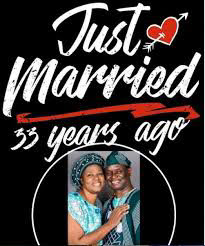 This post is for those looking for Mike and Gloria Bamiloye 33rd wedding anniversary, Celebration of the Bamiloye wedding anniversary. Mike Bamiloye celebrates 33rd wedding anniversary.    Wedding anniversaries have always been known to be grand occasions and whenever the time to celebrate comes, it is only natural for us to embrace it.   Drama minister and Nigeria gospel movie director, Mike Bamiloye shared a lengthy post on his official social media account accompanied with a picture of him and Mummy Gloria. According to him, he said that Gloria is the reason for most of his accomplishments.   Furthermore, he asked for forgiveness from Gloria saying that he has been too busy to love her and has failed in his love for her in the sense that he does not have enough time for her  ALSO READ: Gloria Bamiloye success story. Read what he said, "I FOUND YOU. I COUNT MYSELF VERY FORTUNATE IN LIFE, FOR GETTING MARRIED TO YOU. NO Wonder things are worki
Post a Comment
Read more
More posts